Whether you’re buying used tires, returning a lease, or maintaining the tires on your vehicle, knowing how to measure tread depth is a useful skill. It’s also important for safe driving! Did you know that 44 states actually have a minimum tread depth requirement to pass inspection? This is because tread depth doesn’t just determine how much life is on the tire, it’s also an important component in traction. Having enough tread on your tires can mean the difference between driving safely in the rain and hydroplaning.

Why is Tread Depth Important?

As I already mentioned, tread depth is part of how your tire gains traction on the road. The amount of tread affects how the tire disperses water on wet roads, as well as how much water it can disperse. The lower the tread, the less efficient it is at channeling water away from the center. This affects your the grip in wet conditions. However it’s not just important for the rain. In winter months, the tread helps maintain friction between the tires and the road. This means you still have grip in snowy or sometimes icy conditions. The less tread you have, the less friction it will create.

So what happens if you don’t have enough tread? Obviously you won’t have as much traction on the roads. You’ll be more likely to hydroplane in wet weather, or skid in snow. But your ability to drive in inclement weather isn’t the only thing affected! Your ability to stop, turn, and control your vehicle in any weather is reduced. These safety factors are exactly why so many states have a minimum tread depth requirement.

So How Much Tread is Enough Tread?

The majority of US states set the legal minimum at 2/32 of an inch. Does this mean that’s the standard for “enough tread”? Not necessarily. You see, California and Idaho require 1/32, whileTexas requires 3/32. However, it’s worth noting that Texas requires that for a vehicle to pass state inspection, which is different than a minimum required to be on the road. The remaining 6 states (Arkansas, Montana, South Carolina, W. Virginia, New Mexico, and North Dakota) have no minimum requirement at all.

So how can you tell what tread depth is enough to be safe? Does this mean that if you’re in Idaho you’re safe on 1/32, but you’ll have trouble driving if you cross over into Wyoming? Well, technically, meeting the state requirement doesn’t mean that your tires are as safe as they can be, and it also doesn’t mean that you’ll have trouble driving between states with different minimums. There’s not really a simple answer to this question. Consumer Reports performed several tests to try to answer it, and they found that a tire with half its tread remaining had a stopping distance that was 3 to 6 feet longer in rain. They also lost about 15% of their snow traction and could be at risk for hydroplaning at a lower speeds. All this with half the tread!

So, while 1/32 or 2/32 may be the bare minimum required in your state, you may want to err on the side of caution. In fact, most tire shops and safety experts recommend changing your tires at 4/32, which is also what most dealerships require to return a lease. So really, when it comes to how much tread is enough tread, more is always better.

Now that I Know About Tread Depth, How Do I Measure it?

There are two main methods for measuring the tread depth on your tires. Of course there are others, but these are the easiest and most common.

The simplest (and most accurate) option is to use a tread gauge. This is a small tool that can be found at most auto parts stores, or even the auto section of big box stores. There are a few different styles, but most of them will work the same way. They’ll have a central rod, or plunger, with the measurement notches written on it (usually in 32nds of an inch). This part is usually attached to, or surrounded by, a body that’s designed to both rest on top of the tread (to stabilize and get an accurate measurement), and point out the depth on the central rod. Here’s a picture of the basic kind: 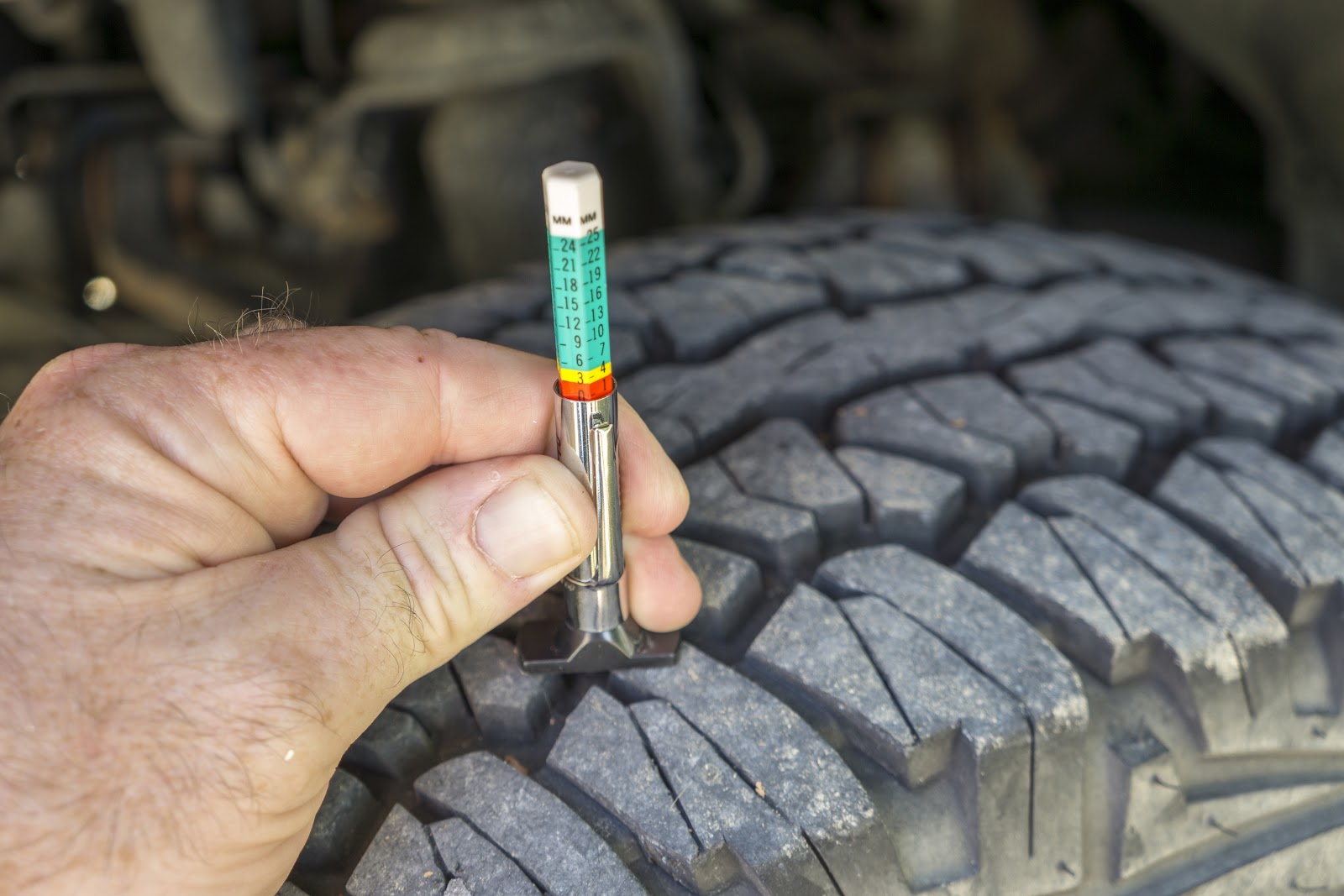 Some of the newer kind will be digital, so they might be easier to read, but they work pretty much the same way. You rest the base on top of the treads with the measuring point between them, make sure it’s not over the wear bars, then push down on the “plunger” part until it stops. After that, you just read the measurement!

Now that’s pretty easy, but maybe you don’t have time to run out and get a gauge, or you just want a rough estimate of your tread. In this case, you can use the second common method of measurement: a penny. You stand the penny on its side between the treads with Abraham Lincoln’s head facing down. If the top of Lincoln’s head is even with your tire treads, this is about 2/32, or at least roughly when you should change your tires. This is a quick way to check your tires before a vehicle inspection, so you can estimate if you should change them beforehand. Here’s a handy photo demonstrating this method: 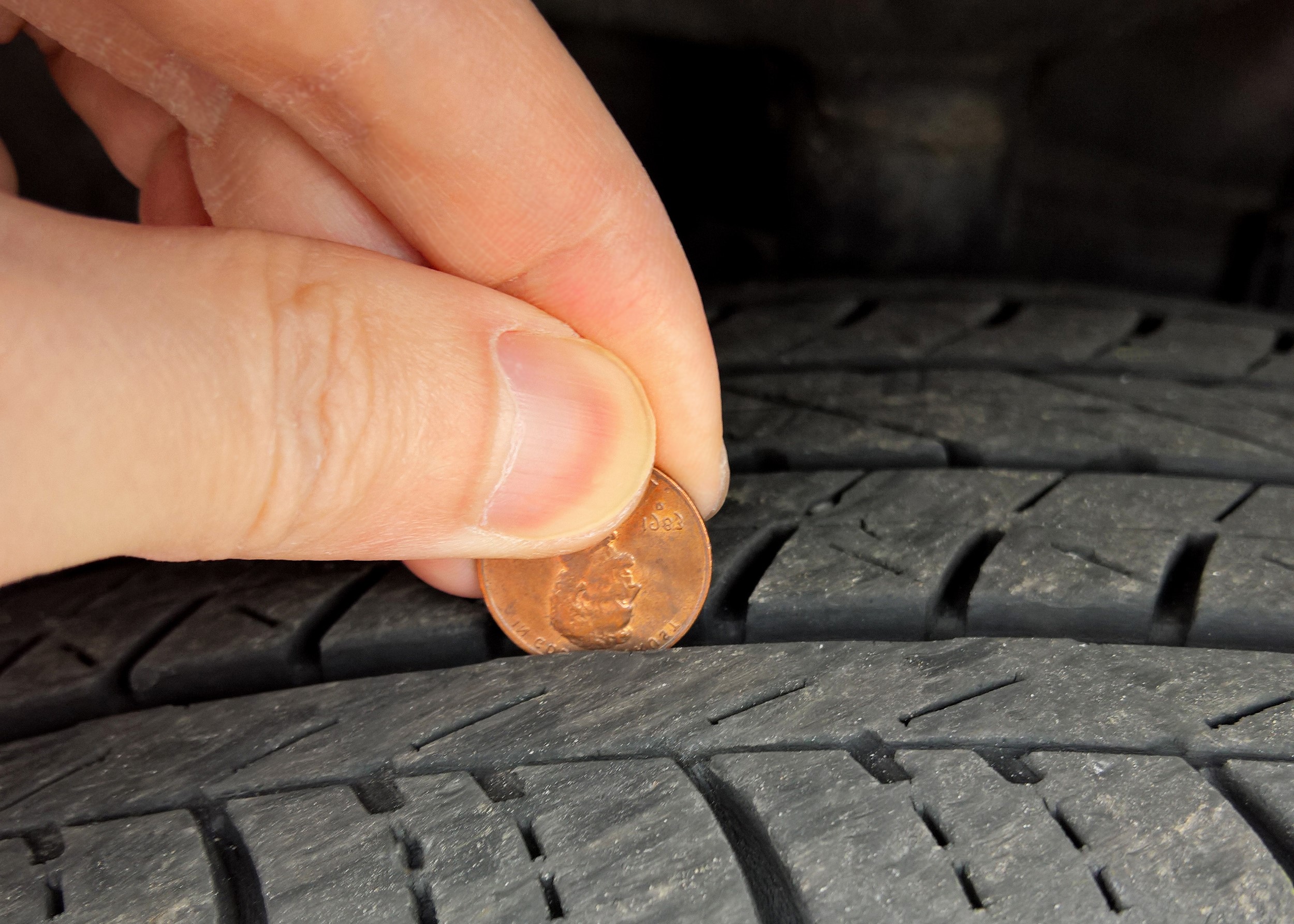 As even the photo illustrates, this method is really only used as an estimation, and you won’t get an exact measurement. But it’s still a good way to know when to start looking for new tires!

It should also be mentioned that with both of these methods, you’ll want to measure near the center of the tire, not the sides. The sides are usually a bit lower than the rest of the tire, due to regular wear and things like turning and maneuvering. So to get an accurate idea of your tread depth, you want to take your measurements from the middle.

Now that you know the basics of tread depth (and how to measure it) you’ll be prepared for your next inspection, lease return, or even snow storm! Drive safe!